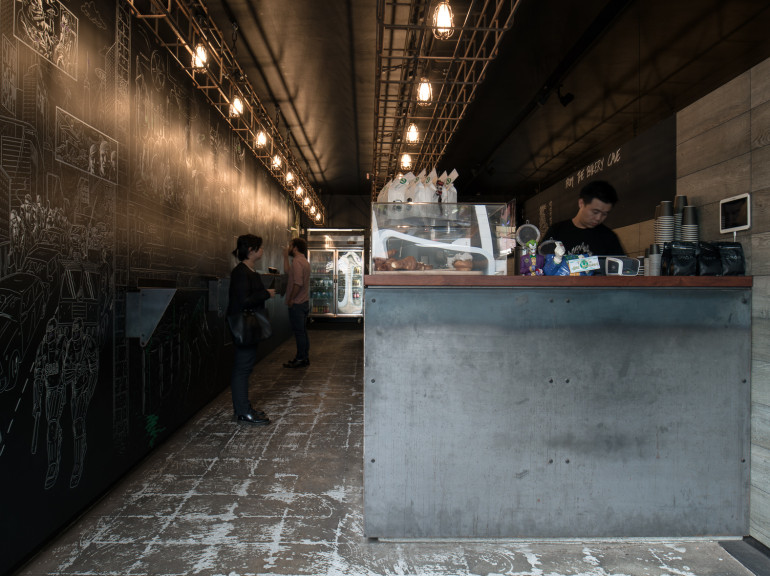 SQUEEZED INTO WHAT was once a driveway, this slim standing-room-only cafe in Sydney’s Surry Hills has exactly the dark industrial atmosphere its comic-character-loving owner was after for his new “caffeine laboratory”.

“He wanted a dark and grungy den-like cave,” says architect Louise Nettleton. “It suits the ephemeral and theatrical sense of this part of the city.”

The client — a Colombian coffee bean roaster, distributor and grower — had set a brief that included a specially commissioned comic-style graphic illustration of “The Mad Professor” on one wall.

Designed in a space that’s 3.5 metres wide and nearly 15 metres deep, the main elements of the design include an L-shaped steel counter topped with recycled Glulam timber. Small steel benches — custom-designed by Nettleton Architects to sit away from the comic graphic to protect it — line the opposite wall.

The other key element in the space are lighting units which consist of a series of Edison Light Globes (LEDs with an old-fashioned aesthetic) contained in long rusted steel cages. These are made from the steel reinforcing bars normally used in concrete construction and which weigh “around 170 kilos,” says Nettleton Architects’ Tiffany Allan. “We brought an engineer in for their installation — the cages have been specially secured into the concrete slab floor of the music school above.”

The graphic is the work of Melbourne Illustrator, painter and street artist Heesco. “We’d been going back and forth for weeks on the concept,” says Heesco. “Basically Simon, the owner, is fanatically into the Joker … So we came up with a character of The Mad Professor, which is a scientific version of the Joker, pretty much … This is my version of The Dark Knight Returns, Judge Dredd and Sin City combined…”